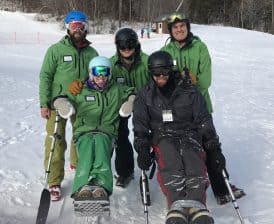 In 2012 at just 21, Martha Stewart (yes, the Martha Stewart) awarded Emily Cioffi with top honors in the “Quest for the Best” national birthday cake contest on NBC’s Today Show. “Someone I made a cake for submitted my cake,” said Cioffi. “They narrowed it down to six of us and my biggest fear was that the audience would think I was picked because of my disability so I stayed behind the table when we were live. I didn’t want the judgement.” When Martha Stewart tasted a slice of Emily’s cake, she pronounced her the winner.

Today, Emily’s passion for skiing has somewhat replaced her love for baking. “I’m skiing all the time and skiing kind of kyboshed the whole cake thing,” she said. She has always had a love for racing and teaching skiing and could never get enough time on the mountain. After an injury (she was born with defective hips, has had multiple surgeries and now uses crutches to assist her in walking) she didn’t think she’d come back to skiing because of her hips. But after a bit of research she learned about Vermont Adaptive and the possibility of using a mono ski to ski. “I showed up for my first day of skiing and was the most excited person on the earth,” she said. “Norm [Staunton] was there and said, ‘You are an athlete. You have a core. You have everything you need. We’re just going to go.’ I knew what a fall line was and how a ski functions. So, we fitted me into the bucket and mono ski and took off. He pushed me up the hill and told me to go straight down, and I actually made two turns and from day one I was really strong.”

After a crash where she dislocated her elbow, Emily struggled a bit for a few years using the mono ski. But finally healed, she came back with a vengeance (although she had more deficits in her legs). Norm said, “You’re losing things but skiing’s not going to change and you’re always going to have skiing.” With more time on the hill, her ability improved to the point where she was an independent mono skier—someone who could get down the hill and on the lift on her own. She attended a race camp and was named a recipient of a scholarship from the High Fives Foundation to attend the Paralympic Nationals at Loon Mountain. “I met people and networked, learned by watching others and analyzed,” she said. “It kindled my fire not only to make the Paralympic Team but also to be a bad ass mono skier, not just to stick to open slopes but to dive into the woods and over bumps that are bigger than me.”

Emily continues to pursue her passion for skiing while working as a phlebotomist and IV specialist. She interned with Vermont Adaptive at Sugarbush Resort and became a volunteer instructor as well. She also purchased her own mono ski. “My main goal is I want to race and be on the Paralympic Team but my end goal is to ski the bumps and trees and all the crazy stuff people ski. It means more to me to be an extremely technical skier that can go anywhere.”

And she still bakes a mean cake.