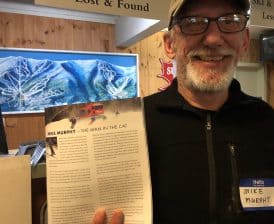 Mike Murphy – The Man in the Cat

When Mike Murphy returned to his home mountain of Sugarbush Resort in 2008 to celebrate the resort’s 50th anniversary, a simple four-day trip turned into a four-week stay—and then some. During that period when he was “visiting,” he discovered the resort’s Cabin Cat Adventures—one of the first cat adventures to be offered in the Northeast. And learned of a beautiful way to find first tracks at the crack of dawn.

“When I was home, I spoke up and said I would drive that cat, knowing that it would be an excuse to come back and ski more,” said Mike, who grew up at Sugarbush while his dad maintained the role of general manager. “Now I’ve had a lot of skiing in the past seven years or so.”

Mike’s journey back to Sugarbush was simply the next step of how he would leave his mark on the resort community. His deep roots with Sugarbush intertwine with Vermont Adaptive’s history and the organization’s migration to the Valley—long before he became the man in the cat.

As an amputee due to a motorcycle accident in 1977, Mike went on to not only teach himself to ski (there weren’t any programs for people with disabilities back then) but to also ski for the US Team at the 1982 World Championships, earning a silver medal in Slalom in Switzerland. “When I returned back East, I ended up at Ascutney Mountain to hang out with the folks down there, met some people and became more involved in Vermont Adaptive. We talked about getting something started at Sugarbush.” (Vermont Adaptive originated at Ascutney Mountain and moved to its current state headquarters at Pico Mountain in 1999.)

Because of his connections at Sugarbush, over the course of the next few years, he approached members of the management team to see if they would be interested in bringing an adaptive ski program to the mountain. He went on to find volunteers, help get the word out and be a liaison between Vermont Adaptive and the resort. Eventually a program coordinator was hired and the program was sound enough that Mike stepped back. And Vermont Adaptive officially had its second winter home in Vermont in 1991.

“One of my good friends was an assistant general manager and he said to me one day, ‘Mike, you did your job. You introduced everybody to each other.’ I thought about that and stepped back and let go,” he said.

Today, the man in the cat drives guests to the top of the mountain for sunset groomer rides, or to dinner to Allyn’s Lodge for a chef prepared dinner and an option to ski down after dinner in the dark. But the bulk of his time is spent taking up to 12 passengers in the Lincoln Limo to experience pristine, deep powder or untouched corduroy for first tracks before the mountain opens to the public in the morning. “We do laps on North Lynx before the lift opens after grooming or on a powder day,” he said. Most groups get three or more runs, depending on the group and the speed and tour taken.

“I’m thrilled to death and tickled pink that Vermont Adaptive has been as successful as it has with the program,” Mike said. “I get a good feeling when I see someone out there with the volunteers.”