2019 Volunteers of the Year 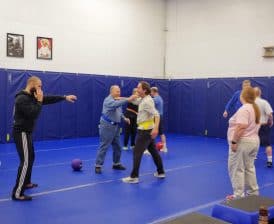 Pushing Back and Staying Active: A Feature on the PushBack Program

When Darlene first was diagnosed with Parkinson’s Disease, she had trouble even getting up from the floor. She would have to crawl to the nearest piece of furniture and pull herself back to her feet. Now, she can get up from the middle of the floor without a problem. She told me that “a few years ago, I was with my grandsons, and they drew out hopscotch on the sidewalk in front of my house. I watched them play but I couldn’t hop. I simply couldn’t do it. Now, I can jump over a jump rope six times in a row.”

Humbly, Maggie says that she started work with the PushBack program because she was in the right place at the right time. She doesn’t mention that she is a licensed physical therapist who has been volunteering with Vermont Adaptive for more than 10 years, or that she is actively working to encourage community collaboration between exercise professionals and the potential value of Physical Therapy in a group setting. Maggie says that what drew her to both Vermont Adaptive and the PushBack program is the idea of “being able to have plenty of time with people who want to move. I love to see the sparks when people put together new movement.”

The program consists of a set of exercises that Maggie and her physical therapist colleague, Parm Padgett, developed in conjunction with the participants of PushBack (called “players”) to improve posture, torso mobility, hip tightness, foot and leg strength, and balance. The exercises are adaptable so that every player, regardless of their level of mobility, is able to do them. The players do these workouts in hour long sessions, twice per week. Each person I talked to has said they feel the benefits. It helps with everything from being less afraid of falling to being able to sleep better.

Player Robert Resnik explained to me that before recent research showing the benefit of keeping people with Parkinson’s active, “people were just told to stay home and sit down and try not to fall.” He said “I wouldn’t be able to do that though. I would turn into Jabba the Hut.”

PushBack is not only about being physical; the program also focuses on the emotional and psychological effects of the disease. Part of the goal is to encourage people to be loud and take up space, resisting the urge to shrink in on themselves that often comes with the prospect of losing your mobility.

When I talked to Anthony, he emphasized to me that “this really is a team. It’s not just a fitness program. We train together, we work out together, and we hold each other accountable.”

Just like any other sports team, the returning athletes didn’t stand around unsure of what to do, or take their time by the lockers. Each athlete came in and immediately began their warm up; they stood on a padded floor with rubber dodgeballs, and dynamically threw them to, and occasionally at, each other.

In addition to the set of exercises the PushBack program follows each practice (like burpees or lunges), the athletes sprinted between two mats on opposite ends of the floor and banged on them as hard as they could, or passed between punching bags while making as much noise on them as possible.

Anthony also makes it a point to challenge the athletes in the gym. During the training he said several times “if it feels challenging, embrace that.” He strikes an impressive balance between making sure that the class is accessible for all ability levels, while pushing each athlete to try his or her hardest. That is something that the athletes don’t always experience. A few of them made the point to me that they are grateful for how hard Anthony pushes them, and that he trusts them to know for themselves when to back off.

At each location, the programming looks slightly different. While the athletes at Combat Fitness may use punching bags and mats, other PushBack teams use gym equipment like treadmills or bikes to do their cardio, or work on their strength by holding planks on the floor. The athletes at each location build a team atmosphere because their specific practice isn’t like anyone else’s and they return to the same location week after week to practice with their team.

Like Vermont Adaptive, the PushBack program is reliant on volunteers. It is essential that the program has partners who help the coach deliver a class where safety, fun, and learning can happen. Vermont Adaptive volunteers are a natural fit to be PushBack partners. Volunteer partners do everything from helping to set up equipment to playfully reminding players to straighten up, to acting as a “shadow” for players who are less steady on their feet. The training for becoming a volunteer is important to ensure the safety of the athletes, and Maggie says that she will do repeated trust falls with these volunteers to make sure that they know how to safely catch someone who loses their balance.

Living with Parkinson’s is an individual journey, because the disease doesn’t affect any two people the same way. The Combat Fitness team proves that there is strength in numbers in this fight. The group feeds off each other’s energy and they keep each other accountable. Because PushBack sessions are treated more like a team practice than a fitness class, they have a community that they can rely on to keep them motivated. For many of the athletes, PushBack is an integral piece to managing their Parkinson’s. It’s important for their health, but it is also a way to make new friends, have fun, and continue their efforts to push back against Parkinson’s.