We were at the Vermont State House today, where our director of communications Kim Jackson gave testimony in frontu2026 https://t.co/3TRZ9LY7yo 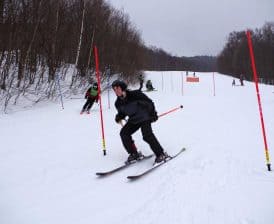 Vermont Adaptive racer Phil takes a moment to adjust his goggles while coach and Vermont Adaptive athlete Emily Cioffi gives him a few pointers on his pole placement. He sets his poles just in front of the starting gates, and Emily counts him down. She yells “Racer ready! Three, two, one! Go, Phil, Go!” and he takes off. After a strong push and a few pole plants, he brings his hands out in front and carves around the tight slalom course that Emily set that afternoon. His instructor Glen follows behind him next to the gates with reminders about his form and where to put his hands.

Phil says that his favorite thing about being on the Vermont Adaptive Race Team is doing what he loves; skiing. He learned to ski when he was three-years-old and has been skiing consistently for more than 30 years. This winter he even took a trip with his family to Vail, Colorado, to ski for an entire week.

Another racer, Chris, who goes by the nickname Turtle while at practice because of how far he’s come out of his shell, also says that he just loves to come out with Vermont Adaptive every Sunday and ski. He doesn’t have a preference for flat runs, or moguls, or the race course as long as he’s skiing. He says that his second favorite thing about the team is the friends, and then french fries are a close third.

On the Vermont Adaptive Race Team, the racing is important, but it comes in second place to the skiing.

This is the typical Sunday scene for the Vermont Adaptive Race Team at any of our three partner resorts, Pico Mountain, Sugarbush, and Bolton Valley. Each week, the teams get together at their respective mountains and run through their gates and technique drills. The six week season culminates with the Special Olympics Vermont 2019 Winter Games in March, where the athletes compete in alpine skiing, snowboarding, cross country skiing, and snowshoeing.

The Race Team began at Sugarbush close to 15 years ago. We added racing to our programming at Pico in 2015, and then to Bolton Valley this winter. Close to 60 athletes can be found on any given Sunday across all three locations. Though each group practices individually, they are united as one, large Vermont Adaptive team. Some of these athletes have been ski racing for more than a decade, and have built a camaraderie between them that extends beyond racing and into the rest of their lives.

At each resort, practices look a little different. At Sugarbush, Norm and Emily set out a practice plan for each athlete. They work on technique drills on the race hill, and skiing and riding challenging terrain on the rest of the mountain.

These practices are held on the race hill where the ski schools and local race teams also practice. Norm says that being in such close quarters and training on the same terrain “creates a really pretty wild, inclusive barrierless environment where some of our guys are better skiers than the racers on the other teams. It gives them the opportunity to show some of the younger athletes how this is done.”

At Pico, the athletes break into groups based on the skills they are working on that day. The team may spend a practice focusing just on edging, and how to carve the side of their skis into a turn. This is particularly important on Vermont race courses where turns can get stiff. Other days the team might focus on speed control. Getting your best time through a course is important, but if a skier or rider is going so quickly that they can’t turn and they miss a gate, then they have to hike back up to that gate in order to finish the race.

The racers at Pico are split up on two different practice days. On Sundays, Coach Tom Alcorn works with racers from the Vermont Adaptive programs and the Rutland Eagles, a local racing team that joins up with us to train. On Tuesdays, Tom meets up with athletes from Zack’s Place at Suicide 6, but they are all a part of the overall Vermont Adaptive team.

And to the north at Bolton Valley, almost 30 athletes are finding their stride in the gates. Because the Bolton team is new this year, the athletes have a chance to take their friendships to the next level and become teammates as well. At 1 p.m. when practice starts, our little corner of the base lodge goes from a flurry of activity with instructors and athletes getting their gear on and going over the practice plan, to just a few folks enjoying their lunch and a quiet moment in between lessons. All 30 athletes get right into the practice plan without procrastinating, and start to practice running gates and improving their technique.

The racers barely break stride when they decide to run their gates. They ski the top of the mountain like professionals and then slide directly into the course on the last third. Their goals are usually focused on the technical aspect of skiing, but they may also be about building the team, like being challenged to ski with a new group of people that the athlete’s haven’t ridden with before.

Sundays are the days to be a racer at Vermont Adaptive, but every day is a day to love being out on the hill. Our racers exemplify that because many of them have been racing for more than  a decade, but that is still only a fraction of their skiing career. The athletes work so hard at practice because they are committed and determined athletes, and because they want to do well at The Games in March. On the Vermont Adaptive Race Team our athletes work hard because, for them, it is truly all about the skiing.