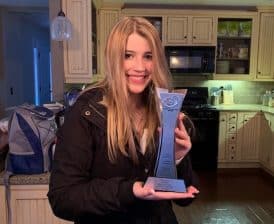 “Imagine a child coming down the mountain with a huge smile on his face,” wrote Syrah Wright, who has been named Gatorade Vermont Volleyball Player of the Year. Play It Forward is Gatorade’s cause marketing platform, which empowers every one of the Gatorade Player of the Year award winners to choose a local or national youth sport organization to receive a $1,000 grant from Gatorade. Syrah chose Vermont Adaptive to receive the $1,000 grant. “He looks like he just did the most fantastic thing. To him, he did. Now, imagine, as I watch him go by me that he has on a jacket that says on the back “VISUALLY IMPAIRED.”

“He has a couple of people with him that are wearing Vermont Adaptive jackets and I realize that his happiness wasn’t in seeing what he just did but feeling it. This had an immediate and powerful impact on me. Picture a wheelchair with skis. A volunteer tethered to ensure the lady gets down the mountain but that lady has the lead and is able to do something adventurous and fun as if they are doing it on their own. Vermont is known for their outdoor community and this allows everybody the opportunity to enjoy it. It also cares for Veterans and my parents both are. To be a part of something that makes lives better and gives people of all ages and abilities the opportunity to participate in sports, I would do it in a heartbeat. Now is my chance.”

The Gatorade Play It Forward initiative works in conjunction with the Gatorade Player of the Year program to empower student-athletes to provide resources to sports organizations in their community.

Through the Gatorade Play It Forward program, all 607 Gatorade Player of the Year award winners have the opportunity select a youth sports organization to receive a $1,000 grant to help the next generation of athletes reap the benefits of sport.

Syrah Wright was recently named Volleyball Gatorade Player of the Year for the State of Vermont. She has had quite the volleyball journey having first been exposed to the sport as a fourth grader in Indiana, to playing competitively as a middle schooler in Pennsylvania, to starring in Vermont at the high school level. As a newcomer, Syrah was chosen as an MMU captain during her sophomore year and is a two-time 1st team all-state selection. She is also a member of Fusion Volleyball Club out of Essex VT. Syrah has played on Fusion’s top 18U team for the past three seasons and has helped the club reach new heights competitively. Fusion has gone from a club level team to a ranked open level team and will begin play this season in the 18U Bronze Division of NERVA (New England Region Volleyball Association). Syrah has really enjoyed watching the sport gain traction in Vermont! Although she is undecided on a major and a school, Syrah is planning on playing volleyball in college and has long term aspirations of coaching. Syrah has loved her time in Vermont and is looking forward to a great club season and her senior year of high school.