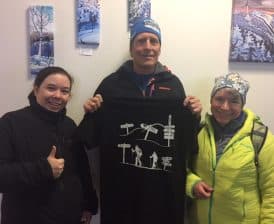 Do You Think You Could Ski for 24 Hours? Skiing for a cause…

Special event fundraisers are an important part of Vermont Adaptive’s fundraising efforts throughout the year. Some events, like the Long Trail Century Ride (June 24), the Vermont 100 (July 15-16) and the Vermont 50 (Sept. 24) are just a few that raise thousands of dollars for our programs and operations. Each one is unique in its one way, and a new one just took center stage this month at Bolton Valley Ski Area, raising approximately $4,000 for Vermont Adaptive.

If you drove up the Bolton Notch Road at 2:30 a.m. on any random early morning, you would find Bolton Valley asleep at the base of its snowy peaks and lifts. If you were there on the night of Feb. 11 however, you stumbled upon a very different scene. You probably saw warming huts, stadium-style lights, and plenty of people. Some of those people were standing in sleeping bags that they had turned upside-down and stuck their heads out of. Others were deliriously careening down the slopes on their skis using headlamps to light their way. A few were passing a golden gnome as a relay baton as one skied up to the other, and the second skied away. What is this that you found? The first annual 24 Hours of Bolton Race, organized by Native Endurance to benefit Vermont Adaptive Ski and Sports.

Race Director RJ Thompson had been sitting on the idea for this event for quite some time, and this year he was finally able to make it a reality thanks to his partners at Bolton Valley. He has participated in the Vermont 50 Ultra-Run a few times and has a passion for endurance races. He was inspired to partner with Vermont Adaptive because he believes that races like this one are great ways to give back and raise some money for a good cause. Thompson feels that racing for a cause “gets people psyched and makes them feel like they’re out there skiing with a purpose.”

The race is a ski-mountaineering endurance race. This means that over the course of 12 or 24 consecutive hours, individuals or teams of 2 or 4, try to ski as many laps of Bolton as they can. One lap consists of hiking up one half of the course with your skis to the peak of the mountain, then skiing back down the other side to complete the lap. The individual and the team with the most laps win their division.

This simple concept nevertheless produced exciting results. As the 24-hour mark rolled around, the competitor in second place came skiing up to the finish line with seven minutes to spare. Race Director RJ Thompson enthusiastically called out to him that if he wanted to win, he had seven minutes to start his final lap. The second place competitor took off without hesitation even though he had already been skiing for a full day straight. Moments later, the racer in first place came skidding into the finish line, but he was five minutes too late. Because it was already 12:05, there was no way he could start another lap. When the first competitor came back, he skied into the end zone in first place, a winner by 155 vertical feet.

Some teams were out there to have fun. One four-person team carried a golden garden gnome as a relay baton instead of one of the batons supplied. Other teams were out for the win. One two-person team had strategized every aspect of their race all the way down to their transitions. As one team member was coming in to the transition, they called out commands to maximize on time efficiency.

The race drew in all types of skiers. The second place finisher was 50-years-old and had been skiing for decades. One of the 12-hour competitors was in his early twenties and had only been skiing for a few years. This kind of inclusiveness is a true testament to how mountain sports bring out the best in all of us.

Looking forward to next year, Thompson hopes that the event grows a little bit more. He’d love to see more teams enter into the two and four person divisions, and he’d love to get some adaptive athletes out on the course. He says that the event doesn’t need to be any bigger to be great, but if he can increase the impact the race makes, he will. His ultimate goal is that this race can embody the quintessential Vermont qualities, on public land, with a tight-knit group of racers, for a good cause. This kind of event wouldn’t be possible without the support of Bolton Valley and Vermont public lands.

At press time, anyone may still make a donation to the event at the 24-Hours of Bolton website.