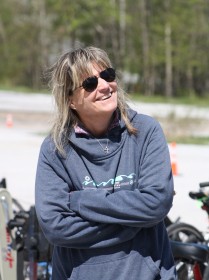 Erin joined Vermont Adaptive Ski and Sports as Executive Director in 2001. Prior to that she worked in the ski industry as a ski instructor, coach and program coordinator. Erin has been actively involved with the Professional Ski Instructors of America since 1987 and holds her Level III Alpine Ski Instructors Certification. Erin grew up in NJ and has been living in Vermont since 1991; she and her husband, Phil, spend their free time with their daughter, Ebe, enjoying the outdoors with friends and family and volunteering for community programs. Erin loves to share her passion for the outdoors and takes pride in the growth of Vermont Adaptive. She is always inspired by the people who volunteer and the top notch staff that helps the organization reach its mission. She graduated from Vermont College with a degree in Human Services and holds her Certification in Non-Profit Management from Marlboro Graduate School. 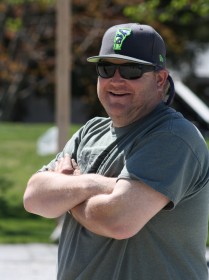 Before becoming a full-time staff member, Norm was a coach, volunteer and trainer for Vermont Adaptive since 2008 and was a contractor for the organization’s capital campaign beginning in 2014. Previously, Norm spent 20 years in a variety of non-profit and adventure industry executive positions around Vermont and the world. He attended the Master’s Program in Outdoor Education at the University of New Hampshire where he focused his research on adventure with people with disabilities. He holds a Master’s in Business Administration from the University of Vermont, where he focused on sustainability and nonprofit management. In his spare time, Norm is an avid skier, sailor, surfer, paddler, fisherman, and outdoor instructor. He makes his home in South Burlington where he lives with his wife, Jenn, and their two Labs, Rudder and Tugboat, and spends as much time on the lakes, waterways, coast, and in the mountains as he can. Originally from Rhode Island, he now considers Vermont home and Southport, Maine, to be his home away from home. Norm is a member of the PSIA/AASI Eastern Division Adaptive Education Staff and holds instructor or instructor trainer certifications in skiing, telemark, paddling, surfing, first aid and sailing. 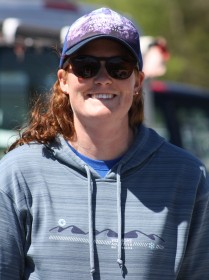 Felicia assumed the role of Program Manager in the summer of 2022 after being the Program Coordinator for Sugarbush and Central Vermont programs for four years. Prior to joining Vermont Adaptive in November 2018, Felicia Fowler coached the Men’s & Women’s Rowing team at the University of New Hampshire (UNH) while also working for a youth program at the Portsmouth Naval Shipyard. She holds a Master’s in Therapeutic Recreation Administration from UNH as well as a Bachelor’s in Recreation Management & Policy. Prior to completing her master’s degree, she interned with the Adaptive Sports Center in Crested Butte, Colorado. Her areas of expertise include adaptive sports & recreation, youth programming, camp programming and event planning. 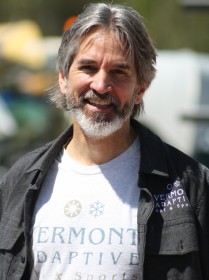 Tom began at Vermont Adaptive as a volunteer at Pico Mountain in 2010, became the Stoughton Pond program coordinator in 2011, then took over as program coordinator for Pico Mountain and Rutland/Killington region in 2012.  Since 2013, Tom has been our Senior Program Coordinator and received certifications as a Wilderness First Responder, Wilderness First Aid CPR/AED and Certified Adaptive Recreation and Sports Specialist 1 or (CARSS 1). Tom has also been a PSIA Instructor for 9 years with Level 1 Adaptive in Mono ski/Bi ski, regularly attends PSIA/AASI Snowsports Management Seminars, is an American Canoe Association level 1 Paddleboard instructor and has the Adaptive Paddling Instructor Endorsement. Before Vermont Adaptive, Tom worked in the human services industry for over five years and prior to that spent many years in the tourism/hospitality industry. Tom is originally from the Philadelphia area and moved to Vermont in 1993. Tom received his degree in Human Services, is certified in “ The Zones of Regulation” an approach to support emotional/behavioral self-regulation in students. He enjoys free time with his family, alpine touring in the morning, is a well-traveled music enthusiast and gourmet foodie. 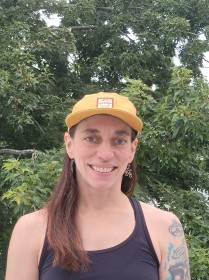 Betsy began at Vermont Adaptive in August 2022 after spending time as a volunteer and jumped in feet first with fall programs in Burlington and preparing for the Winter 2022-23 season at Bolton Valley. Betsy holds Wilderness First Responder, First Aid and CPR certifications as well as PSIA Level 1 Adaptive Mono/Bi-Ski Instructor, BICP Level 1 Mountain Bike Instructor, BICP Level 1 Adaptive Mountain Bike Instructor, US Archery Level 1 Archery Instructor and US Soccer D License certifications. She was most recently the program coordinator at Essex Parks and Recreation where she ran after school enrichment programs, soccer programming and an outdoor summer camp. She holds a B.A. from the University of Vermont and an M.A. from American University. In her free time, she enjoys mountain biking, rock climbing, hiking, skiing and playing soccer. 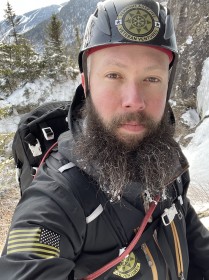 Misha Pemble-Belkin served nine years as an Army Paratrooper from 2006 through 2015. He successfully completed two combat tours to the Kunar Provence of Afghanistan with a total of 27 months spent in country. On his second tour he was injured and required a medical retirement from the service in 2015. Misha Pemble-Belkin became a participant of Vermont Adaptive Veteran Venture Program during the Winter of 2015-2016. He then interned with Vermont Adaptive during the winter and summer of 2017, and then began a VA Work Study that fall. Misha graduated with a degree in S.T.E.M. Studies from the Community College of Vermont in 2017 and is working on a Recreational Therapy degree from Florida International University.

Molly began volunteering at Vermont Adaptive in 2018 and has since interned for both Burlington summer programming and Pushback/CORE Connections. Her love for adventure sports and helping others has kept her seeking new opportunities with Vermont Adaptive and she became the program coordinator for Burlington and Bolton Valley. In the Fall of 2022 she returned to the University of Vermont to start a doctoral program in occupational therapy but will continue with Vermont Adaptive as a part-time coordinator. She has experience guiding and teaching wilderness leadership courses and holds Wilderness First Responder, CPR and First Aid, and ACA Level 1 & 2 kayak touring certifications. Molly is a recent graduate of Saint Michael’s College in Colchester, VT where she studied biology and was a student instructor for the Adventure Sports Center. Growing up on the coast of Maine, Molly has an affinity towards water sports, road biking, and sunrises but Vermont’s skiing and mountains have kept her around. She is excited to start this next adventure and continue to learn and grow with the program.

Korey moved to Vermont ten years ago and graduated from Green Mountain College with a degree in Resort Management. He started at our Pico Mountain office as a development and marketing assistant and now maintains and repairs our huge fleet of equipment. Prior to joining Vermont Adaptive, he spent the past eight years working for Killington Resort and other companies in various managerial capacities, primarily focusing on finance and events. His love of the outdoors and his belief that everyone deserves to be able to get outside and play is what motivated him to join the Vermont Adaptive team. Korey specializes in database management, marketing, and social media development and events and is an avid mountain biker, snowboarder and adventure enthusiast. 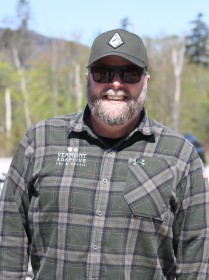 Jeff has been a volunteer at Vermont Adaptive since 2012 before joining the staff in the Fall of 2017. He has worked in the NFL, MLB and Major Indoor Soccer League, as well as various minor league affiliates. Jeff has an Environmental Science degree yet owned a Marketing and Events firm in Philadelphia. He moved to Vermont for a stint managing events for Okemo Mountain Resort and recently spent the past six years as the Events and Sponsorships Manager at Killington Resort and Pico Mountain. He is an avid outdoorsman who loves to snowboard, downhill and cross country mountain bike, hike and paddleboard with his wife and daughter.

Kim worked for Vermont Adaptive for five years as a marketing and PR consultant before joining the staff in 2013. She owned KJPR, and represented companies in the outdoor and ski industries as well as in general tourism and marketing. Her work spans from writing hard and feature news stories as a reporter for the Boston Globe and The Gloucester Daily Times, to being the PR director and communications manager for a large corporation in Boston and for Killington Resort among others. She also served as the production manager for a graphic design firm. She has placed stories in the New York Times, the Wall Street Journal, the Boston Globe, and Boston Herald, and Sports Illustrated plus in hundreds of local, regional and national publications as well as social media outlets. She holds a B.A. in journalism from the University of New Hampshire and enjoys skiing and outdoor activities with her husband and daughter.

Prior to joining Vermont Adaptive in July 2019, Lexi worked for Rutland City Public Schools as the Special Education Administrative Assistant at Rutland High School and Coordinator of the Free & Reduced Meal Program for the district. Earlier, she was the Volunteer Coordinator at Northeast Primary School. She enjoyed working in the school system, but when her son graduated in June of 2019, she did too.  Lexi also spent two years at United Way of Rutland County before transitioning to full time at the school. Earlier on, she spent many years on the road doing interesting market research projects. She is a familiar face at Pico Mountain as she has spent weekends in the retail shop, at the scoreboard during her son’s ski races, coordinating the annual Pico Ski & Snowboard Swap and on the Pico Ski Club Board of Directors. She also serves on the Patient and Family Advisory Council at Rutland Regional Medical Center. Lexi holds a BS in Business Administration from Pepperdine University and enjoys traveling, walking her dog, skiing with friends and riding her Harley with her husband. 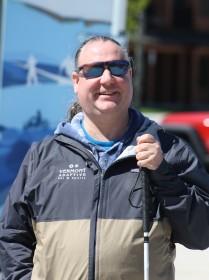 Mac has been a client and involved with Vermont Adaptive since 2000. He joined the staff in 2004 and works on fundraising, grant application and sponsorships. Mac is originally from Rutland, Vermont and currently resides there. He has been involved in adaptive sports and recreation for many years and is an avid sailor and skier and enjoys paddling and biking. Mac attended University of New Haven and graduated with B.A. in Music and Sound Recording in 1998. Mac is a keyboard player and plays in a local band. “I started out as a participant with Vermont Adaptive and now as a staff member I am inspired by the exposure to outdoor activity that the organization provides me. And I love the social aspect that it provides with other adaptive athletes.” 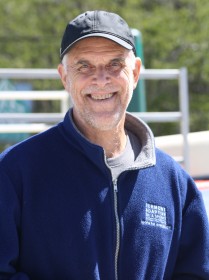 Kip has been employed at Vermont Adaptive since 1999. He has been living in Vermont since 1985 with wife Karen. Kip has been practicing law since 1990 and has held a variety of positions with businesses, banks and with the State of Vermont. Kip is also active outdoors. He received his undergraduate degrees from Stockbridge School of Agriculture and University of Massachusetts and law degree from Vermont Law School.

A volunteer Board of Directors governs Vermont Adaptive. These directors are dedicated individuals whose expertise lends to the organization’s vitality. Board meetings are held quarterly. Our fall annual meeting is open to all staff, volunteers, and participants and is held to celebrate the organization’s successes and set the course for the next year.